I Bought A MacBook Air

I am not a Apple fanboy and have always sworn against them, primarily out of ignorance. So how did I get here? My trusty Lenovo laptop, ideapad Y530, is dying. After having had it for ~3 years the screen is now flickering at points and the screen needs to be placed in a specific position so that it works. That’s fine, computers die. It’s a fact of life. A younger me would have gladly torn it apart and replaced the failing parts. The current me does not have the patience or motivation to do this. So now the question is, why the Mac if you hate them?
The answer is, I wanted an ultrabook and I wanted something speedy. I do not use my laptops for primary machines, just minor code editing, word processing, maybe a video, and basic things. I have a much more powerful desktop that’s running Windows 7 in the event that I really need to get some work done. So, having always admired the MacBook Air, I pulled the trigger. I talked to a few people about their Macs (not fanboys) and found that they really enjoy them, from the stable OS to the high quality hardware. The kernel is loosely based on that of FreeBSD, and as a linux system administrator, that’s something i can understand.

So, how’s it going..?
It’s truly amazing. I would have never thought that I would say that about a my mortal enemy since first grade… The green screen, the floppy disks that were actually floppy, and the second disk of Oregon Trail always going missing.
At this point, I don’t have time to be toying with settings and making custom configurations to my machines. This is why I have never ran linux on any of my home machines. I tried Ubuntu and Fedora for a while. They’re both excellent operating systems, but neither would function the way I wanted. (ie. Just work.)
That’s something I will say about this computer. It just works. Since I’ve owned it, I’ve rebooted it once. That was for the Lion to Mountain Lion update. The fan comes on occasionally but not nearly as much as my previous laptops. The battery life is amazing, I don’t have hard numbers, but here’s a pretty good representation. 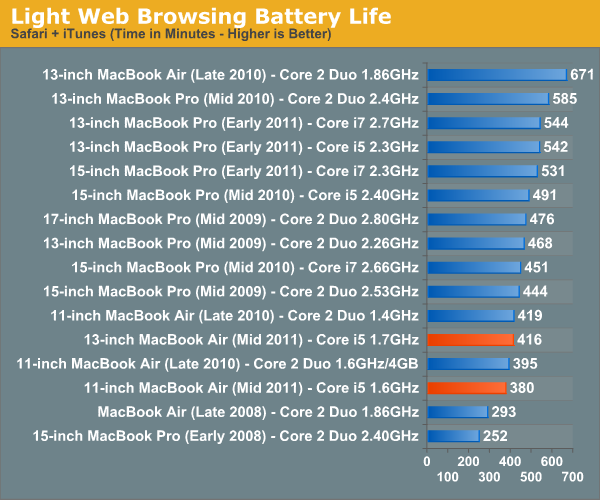 Photo courtesy of Anandtech
In addition to the above mentioned PROS, the backlit keyboard is spectacular. If you do not have a backlit keyboard, you’re not living. It’s simply stunning. Questions that I’ve been asked are, besides how do you like it, “How does the keyboard feel, smaller than most?” No surprisingly. On the 13.3 model, it’s just fine.

You sound like a Mac fanboy…
I’m not. I’m just impressed. The computer does have it’s cons, but they can be changed. The primary issues I have at this point are the caveats associated with the learning curve between Windows and OSX. Dumb things like the touchpad only recognizing two of my three fingers when trying to swipe across my fullscreen apps and instead, taking me back a page in my browser.
The other issue is the cost. When I clicked the button to submit my credit card details, I got a bit light headed. Then when I saw it pull out of my bank account, it was equivalent to falling off a bicycle seat and on to the bar. It’s an Apple product, you must pay a premium. As far as I am concerned(now()), for the stability, and the quality of hardware, the price is a bit of a bargain.

Who would I recommend these to?
If I were in a datacenter, this would be excellent.
College students. If you use an external hdd (cheap anymore) for music and videos, this would be an excellent computer.
Web browsing, mail checking, and shopping stay at home moms. Stable, much lower chance of infection.
Mac Fanboys. 🙂

What are you using now? How do you like it?